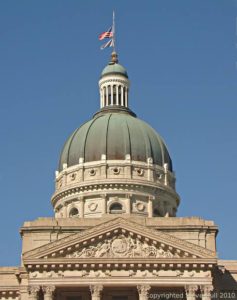 The 2019 session of the Indiana General Assembly adjourned on April 24th. We achieved several great successes this year, but are already looking ahead to 2020 to work on some issues that didn’t make it across the finish line.

The need for a wage increase for Direct Support Professionals (DSPs) continues to be a critical issue. Despite the hard fought efforts of key legislators, leaders of local chapters of The Arc, families, self-advocates and our legislative team, no new funding to increase Medicaid Waiver rates for increasing DSP wages was including in the state budget bill.

Quality workers are being lost to other professions. Providers cannot compete in the job market with an average of $11/hour wage. It is crucial we continue making an effort to get our average wage up to $15/hour. This year, money was tight as the revenue forecast gave legislators $100 million less to work with when crafting the budget. We need to continue to let legislators and leaders at the Family and Social Services Administration know that this is critical to Hoosiers with I/DD and their families.

SEA 380 Supported Decision Making
This law puts into statute supported decision making as an alternate to guardianship for people with disabilities as well as those who are elderly. Supported Decision Making allows for people to get some of the needed guidance and support they need on some important and critical issues, but it allows them to remain the primary decision maker and does not remove their civil rights. Governor Holcomb signed this into law April 24th.

SEA 198 Bias Crimes
In determining what sentence to impose, this law gives the court the power to consider if a crime was committed because of certain perceived or actual characteristic of the victim, which include: color, creed, disability, national origin, race, religion or sexual orientation. This list does not explicitly include: age, sex and gender identity.  Governor Holcomb signed this into law April 3rd.

HEA 1296 Medicaid Waiver Priority Status for Military Children
This law supports Indiana’s major initiative to attract active military families and veterans. Families have reached out noting that access to the Family Support Waiver is important to those families who have a loved one with an I/DD. Currently the waiting list for the FSW is 18 months and though the state targets 300 individuals per month, these families many times go without needed services because they move before, they get targeted. This law allows military families to move to the top of the waiting list. Without this type of prioritization, many people with I/DD go without much needed services simply because their family who are serving in the military move often. Governor Holcomb signed this into law April 18th.

SEA 189 Emergency Communication Disorder Permits
This allows the Department of Education to issue permits to individuals to serve the needs of certain students who are eligible for speech and language services. The individual providing the services can be in a graduate program as long as they are being overseen by a licensed Speech Pathologist to show they are complying with all requirements. Governor Holcomb signed this into law April 24th.

SEA 112 Anatomical Gifts and Individuals with Disabilities
Prohibits health care entities from discriminating against a potential transplant recipient solely on the basis of a disability. Governor Holcomb signed this into law April 3rd.

Independent Living Centers funding will be distributed between the centers instead of allocating specific funding to each center.

IIDC received an estimated $300,000 of additional funding to do a pilot program for Milo The Robot. The pilot program will supply Milo to schools in rural, suburban and urban areas to see how having Milo in the classroom effectively helps students with autism.

HB 1216 First Steps
This bill would create an efficiency within the system for those families who qualify for TANF, SNAP or Medicaid so they do not need to show proof of income more than once. This also tasks FSSA to define “missed” and “cancelled” appointments and would provide more flexibility when it comes to making up appointments.

HB 1542 Human Service Matters
The break down of the First Steps funding appropriation is in this bill. The language includes 10 percent for FSSA to keep for infrastructure improvements for the program, 40 percent of the new appropriation will go to the SPOES (single point of entry), these are the organizations that do consultation and intake with families to get children evaluated and signed up for services if they are determined to qualify and need services. The remaining 50 percent will go to providers who deliver the services to the children. The money will be put toward increasing rates, which were studied this past summer and determined to be in need of increasing up to 80 percent.

HB 1629 Education Matters
This bill creates an education dispute resolution work group through the State Board of Education. The work group has several duties but the most significant will be to discuss the issue of shifting legal fees to parents regarding the dispute resolution process. This is a very sensitive issue and one that will not go away until the issue is discussed, thoroughly vetted and then determined to be allowable/not allowable. The Arc of Indiana firmly believes that IDEA clearly defines the complaint process and nothing is allowable that would deter families from pursuing their legal rights under the law and the threat of legal fees would certainly deter families. This bill also allows for accommodations to be put in place for students who need a screen reader, voice-to-text, or human reader according to their IEPs to complete ILEARN or other statewide assessments.

HB 1641 Education Matters
This bill specifies that a representative of The Arc of Indiana should be on the State Advisory Council on the Education of Children with Disabilities.

HB 1089 Seizure Preparedness
This bill would required each school to have a seizure action plan.

SB 132 Civics Test
This bill would have required students to pass a civics test in order to graduate high school. However, the bill was amended to require a civics test to be a part of the High School Government class curriculum instead of a test for graduation.

HB 1400 Education Mandates
Requires a summer study committee over the course of the next couple of years to look at all the mandates placed on schools. The committee will either eliminate, update or streamline these mandates.

SB 480 Medicaid Non-Emergency Medical Transport
Addresses issues of appointments being missed, and the lack of quality transportation services and provides oversight of the process. An amendment was added to the bill outlining who will make up the oversight commission and ensuring that FSSA has staff work with the commission.

HB 1113 Telecoil and Beacon Positioning Systems
This bill requires that construction or rehabilitation on Class 1 structures in first or second class cities after June 2020 consider the installation of a looping system in public areas of the building. This looping system allows those with hearing aids and cochlear implants to connect to the system in public venues to eliminate background noise and improve hearing quality.

ABLE Account Tax Credit
Our goal was to create parody between the ABLE Account and the 529 College Savings Account, by giving the ABLE Accounts the same tax credit to those depositing funds into an account just like the college savings accounts. The tax credit was stripped out by Senate fiscal leaders which halted the bill from moving any further.

Managed Care
In a meeting with Ways and Means Chairman Todd Huston (R-Fishers), Dr. Wathall along with other FSSA and DDRS leaders, INARF and The Arc of Indiana came to an agreement that managed care was not on the table as there are major priorities from the 1102 Task Force and the waiver redesigns that need to be implemented instead of managed care.

Modified Symbol of Access
We want to get rid of the stigma that Hoosiers in wheelchairs are immobile. Our goal was to update the symbol of access to a wheelchair in motion and remove the word handicap from signage. This legislation got attention from INDOT and they said this is a federal issue as we would be violating Manual on Uniform Traffic Control Devices for Streets and Highways.

Alternate Diplomas
We want to set our students up for success in the future and by doing that is for them to receive a high diploma. We do not want the state to just hand out diplomas, but for the student, school and department of education to exhaust every avenue possible for them to receive a diploma instead of a certificate. An agreement could not be reached between legislators on what the cap of number of alternate diplomas can be given.

ABA Licensure
After both the House and Senate Health Committees were inundated with bills this session. House Health Chairwoman Cindy Kirchhofer (R-Beech Grove) said she would hear an ABA licensure bill next session as this is a perfect conversation to have during a short, non-budget session.

Cigarette Tax
The goal was to raise the state’s cigarette tax by $1.50 to generate funding for our state’s health priorities, which go hand-in-hand with some of the services Hoosiers with I/DD use. We hope there is more of an appetite for this the next budget cycle as Indiana creeps to the bottom of the state’s ranked for public health funding.