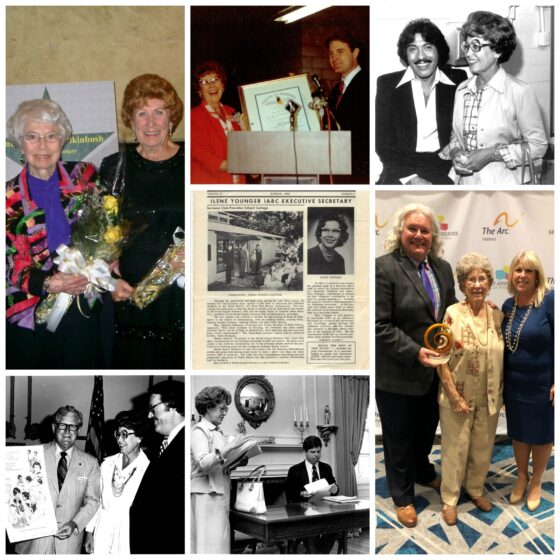 It is with great sadness, but with immense appreciation for her life, that we share the news that Ilene Younger Qualkinbush, the “founding mother” of The Arc of Indiana, passed away on May 14, 2020 at the age of 93.

Inspired by her daughter Susan, who was born with severe developmental disabilities, Ilene helped establish The Arc of Indiana in 1956. Along with her friend and colleague, Dorothy Burnside, Ilene served as the first lobbyist for The Arc at the Indiana General Assembly. She became The Arc’s first paid employee when she was appointed Executive Secretary in 1963 and was elected as The Arc of Indiana’s first female president in 1988. Through the years, Ilene served as a volunteer for 7 years, a professional staff member for 18 years and then again as a volunteer for 13 years.

Ilene was a humble and hard working woman and was recognized locally and nationally for her work. She received the Sagamore of the Wabash in 1990 from then Governor Evan Bayh, the Drummer Boy Award in 1992 from Noble/The Arc of Greater Indianapolis, and the Lifelong Achievement Award from the National Conference of Executives of The Arc in 2003, plus many other recognitions. In 2019 she was honored by The Arc of Indiana with the creation of the Ilene Younger Qualkinbush Service Award.

Ilene was born to the late Raymond L. and Opal M. (Hughes) Qualkenbush on September 5, 1926 in White County, Indiana. After graduating from Monon High School in 1944 she entered St. Elizabeth School of Nursing, graduating in July 1947 and received her Registered Nurse License in November 1947. After marrying Robert D. Younger in 1948, they moved to Indianapolis and she worked at Methodist Hospital in obstetrical nursing for about 6 years. They had 2 daughters, Karen R. (Younger) Ferguson, Greenwood and Susan K. Younger.

Due to the current restrictions, private services will be held with the family. A Celebration of Life may be scheduled at a later date. We are honored that Ilene’s family has shared that memorial contributions may be made to The Arc of Indiana, 143 W. Market Street Suite 200, Indianapolis, IN 46204. Donations may also be made online.