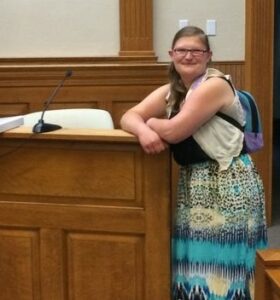 Throughout Developmental Disabilities Awareness Month we celebrate the achievements of people impacted by a developmental disability. Learn about the amazing journey of Jamie Beck, the first Indiana resident to use a Supported Decision Making agreement in place of guardianship and regain decision-making rights.

Jamie’s story begins several years ago, when Achieva, The Arc in Wayne County and Dan Stewart, Achieva executive director at that time, became guardians for Jamie when she was left without any known family. Her mother had died in 2009, and her stepfather died in 2012. Jamie, a young adult with no home, was placed in a nursing home until Achieva could become her guardianship and move her to a Medicaid funded group home.

Jamie began working at a sheltered workshop, but wanted to earn more money and advocated to get a regular job. After she was turned down at more than 40 places, Jamie went before the City Council to share her frustrations. The next day, after sharing her resume with Council members, Jamie was hired at Pizza King.

Wanting more, Jamie went on to enroll at The Arc of Indiana Foundation’s Erskine Green Training Institute in Muncie Indiana where she completed the 13-week environmental studies program, including an internship at IU Health Ball Memorial Hospital. Upon graduation, Jamie was immediately hired. She is now working full time with benefits and lives in an apartment nearby.

In 2018, through a pilot program with Achieve and the Wayne County Courts, Judge Gregory Horn granted Jamie’s petition to terminate her guardianship and approved her Supported Decision Making.

In 2019, following advocacy by The Arc of Indiana, Jamie, and Indiana Disability Rights, Governor Holcomb signed Senate Enrolled Act 380 into law on April 24, 2019.  The new law recognizes Supported Decision Making Agreements as an alternative to guardianship and requires Less Restrictive Alternatives (LRAs), including Supported Decision Making to be considered before the court will appoint a guardian. 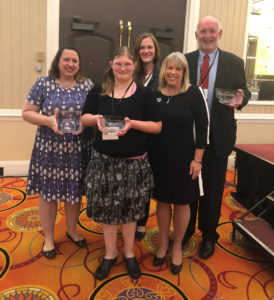 Jamie is a true trail blazer who has fought hard to achieve independence and a full life in the Muncie Community.

Watch Free to Be Me, Jamie Beck’s Story